It's very hard to believe that it is already November. I think I have been in complete denial that the summer is actually over and that winter is almost here. It wasn't until yesterday that it actually hit me when I left my house at 4:50 to pick up my son Zolie from daycare and it was already night time! When Zolie and I left the school he kept saying "dark, dark", even my toddler realized that something was not quite right. He was probably remembering all of those great summer days when we would stay out playing in the yard until 7 pm or later. Just like the song says-- summer time and the living is easy. 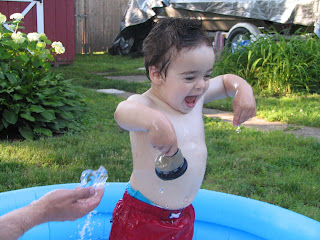 It's not to say that I don't like the autumn-- it's actually one of my favorite times of the year. I definitely had a fun time getting ready for Halloween all of October. But there is nothing quite like those lazy days of summer that feel like they are going to last forever. Well, in a final and feeble attempt to hold onto a bygone season I am going to leave you with an image of Zolie whooping it up in his kiddie pool in our backyard, so enjoy!

One of the big events of this month, and one that we all got to be a part of (at least I hope so) was the 2008 Presidential election. It was truly a moment in history and one that we will get to tell our children and grandchildren about one day; the year when the first African-American was elected President. When I woke up on Wednesday morning and found out that Barack Obama was going to be our next president I honestly felt proud to be an American. This man truly represents the changing face of the American people. And the fact that he was actually elected as President sends a message to the rest of the world that America is ready for a new and improved global image.
This election was also a historical moment for us on a personal level. This year Zoltan had the chance to vote for the first time as an American citizen, in fact it was the first time he has ever voted in any Presidential election. He was so excited about it and a bit overwhelmed by the responsibility of it --he's so cute! We dropped off Zolie at daycare together so that we could go to the poles together to vote. Luckily, there were no lines and we were able to jump into a booth right away. I probably waited an extra five minutes while Zoltan completed his ballot. He probably read over every one's name just in case--oh! I think it really meant a lot to him and gave him a sense of how far he has come since he left his home country of Romania.
Well, there it is. Nov. 4th 2008 two American men make history in their own way-- one man named Zoltan and the other man named Barack-- Only in America, God Bless America!

Posted by The Traveler's Realm at Thursday, November 06, 2008