I can't believe we have exactly 14 days till Christmas eve. Not everyone celebrates the eve of Christmas, but in my family it has always been the bigger celebration. I can't wait!

Although I'm looking forward to it, I really want to stretch out this holiday season and enjoy every aspect leading up to it, especially since my little guy is really starting to get it. He was so excited to see our Christmas tree all lit up with lights, it was too cute. I know the Christmas tree ornaments are too hard for him to resist too-- he likes to touch and feel all of the ones that are within his reach. So far we haven't had any accidents involving glass Christmas tree balls and my two year old, but I'm keeping a close eye on him just in case.

One of the ways I've been trying to stretch out the season and a way to build some family traditions is to do something festive each weekend. One weekend we went to the tree lighting ceremony in our town, they had a drum and fife core that marched in right before Santa arrived on a fire engine, it was fun. This last weekend we went to a Christmas festival on Friday night at a local park, where they had hay rides and pictures with Santa and even a Victorian mansion all done up for Christmas -- I probably liked that part the best, but I won't tell my boys that because they really thought the hay ride was the best.

The following day we went to a Christmas tree farm to cut down our tree. T 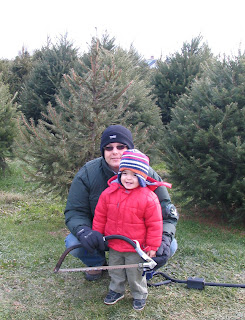 his was the first year ever that we had done this-- so it was something new for everyone. Well, although I'm sure it will become a tradition that we will all enjoy one day, my little guy was just miserable the entire time. I ended up carrying him through most of the farm which was not easy, he's a big boy-- my back was paying for that. Actually, this picture of him and hubby in front of our soon to be Christmas tree was the only smile I could get out of him. Well that's kids for you, their full of surprises and you never really know what their reactions are going to be. Luckily he perked up later when Santa offered him a candy cane-- nothing does it for him like candy, he was all smiles!

Later on that day my hubby and I decorated the tree-- which is something I always look forward to. Nothing smells quite as good as a freshly cut pine tree and some hot coco brewing. My little guy was strategically excluded during the tree decorating-- he was napping. I just don't think at two he can emotionally handle something as exciting as decorating th 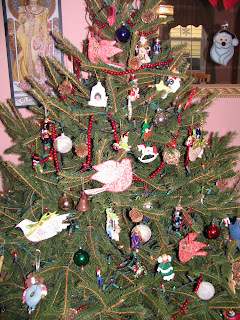 e tree. Instead, we surprised him when he woke up with a completely transformed Christmas tree. He was sooo excited! I am looking forward though to the upcoming years when we can all partake in decorating the tree-- I'm sure he'll have all his favorite decorations too, just like I did as a kid.

Every year I try to add something new to our tree. Usually, I have a few new ornaments to commemorate my little guy's last Christmas, which usually include some photo ornaments-- which are always so much fun to look at. This year I also thought I would hand make some of the ornaments for our tree. I found two great bird templates in a craft magazine and turned them into tree ornaments. I have to say, I really had fun making them and it didn't take me that long to do it. 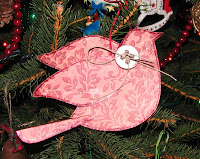 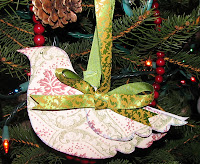 To make these adorable birdies I used Melissa Frances DP, Stickles glitter glue, some Michael's dollar bin ribbon and button embellishments and some hemp twine. I made a total of six, three of each. I just love the way they look on the tree, as if they've set up their nests for the winter in our beautiful pine.

Posted by The Traveler's Realm at Wednesday, December 10, 2008