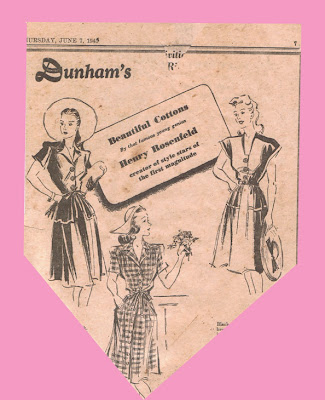 Is that not the greatest title!I borrowed it from this old add for lady's dresses from a 1945 newspaper. Where, might you ask, did I get my hands on a newspaper from 1945? Well, actually it was under some of the flooring in my house that my husband just ripped up. A 64 year old piece of newspaper, which up until this point was acting as some kind of insulation in our old mud room. That's pretty old, but our house goes back even further than that-- probably to 1895. He was about to throw it out with a bunch of the old wood he's been ripping out, but when I spotted this image in the garbage can I knew it was a keeper. I love all things vintage, and you can't get more vintage than this. It's really beautiful in that timeless sort of way.
My hubby's been hard at work making all the necessary updates and repairs we need to do before we can install our new kitchen. The first phase of the project is to secure the rotted out floor of our old mud room so that we can use it as a laundry room. Right now our stacked washer and dryer is taking up valuable space in our kitchen. Once we move that into our new and improved mud room--- which also has a new toasty gas heater, thanks to my hubby-- we can plunk a dishwasher right in it's place. Well, it's actually easier said than done, but were hoping it works out like that. The picture I've included is actually the area of the floor he's torn up, the cement support he's installed to support the new beams, the red jack he used to lift up that section of the house and the dirt beneath that area of the house. It's really frightening to go in there these days, but I know it will be such a wonderful improvement in the near future.

I have to say my hubby has been really wonderful about everything. He's working his tail off so that he can improve the way our household functions and I'm really grateful to him for that. Also, he's been very supportive of my card making. Of course, he's not too pleased when I spend extra money on my hobby, but he's happy to see that I have an interest that makes me happy. He's even developing an eye for my style. A few night ago I came home from my monthly stamping class at my local library with two cards to show him. He took one look at them and said, "Nice cards, but there not your style." Well, the cards that I came home with are great, even if they are different from my typical style. We always learn two new stamping techniques and I always have the greatest time when I go. I just thought it was the sweetest thing that my hubby actually get's my style, especially since he's not the artsy type-- he leaves that to me. 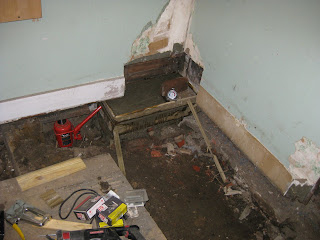 As I mentioned, the cards I came home with were great, in fact down right adorable. I'm still very new to stamping, so I have much to learn and found this session invaluable. For the first card, the rocket ship, we colored in the stamped image with ink using a blender pen. That's what gives it the water colored look. We also used a sponge and ink to create the look of the earth below. The cupcake card had to be the most fun card I have made so far. To create the look of icing we used a craft ink re-inker in white and a small drop of re-inker in red. It went on thick and creamy just like icing. We used a paint brush to spread it around. Then glitter was applied directly to the ink mixture and everything was heat set. The cherry was colored in with red ink and then we applied a clear glaze over it to give it a good enough to eat look. So, even though these cards are not exactly my style, I love them and plan on using both of these techniques in my own future creations.

I hope you enjoy,
Tina